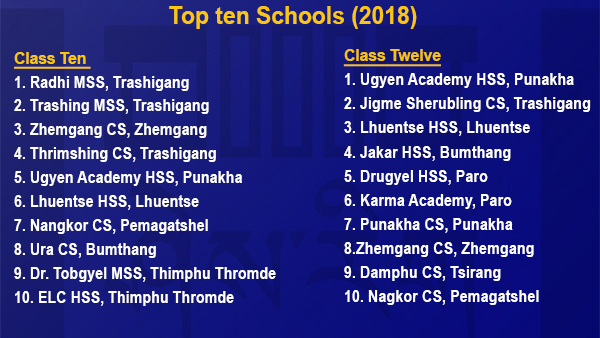 This is as per education ministry’s annual school rankings of 2018 released earlier this month. Annual rankings of top ten schools are declared at four levels of schools.

None of the government schools in Thimphu made it to the top ten.

Karma Academy in Paro is the only private school to make it to top ten in class twelve besides Ugyen Academy.

The performances of the schools are based on three categories of academic learning, enabling practices and GNH.

Academic learning measures school’s performance against student academic outcomes such as percentage of student performing above 45, 60 and 70 per cent. It also stresses on authentic learning rather than rote learning.

This category is assessed by District Education Officers (DEO) at the start and towards the end of every academic year. And GNH measures achievement on GNH values and practices in schools as measured through GNH indicators developed by Education Monitoring Division. This is also assessed by DEOs twice every year.

Education Monitoring Officers visit schools with an objective to find out the causes of low performance and identify appropriate interventions.