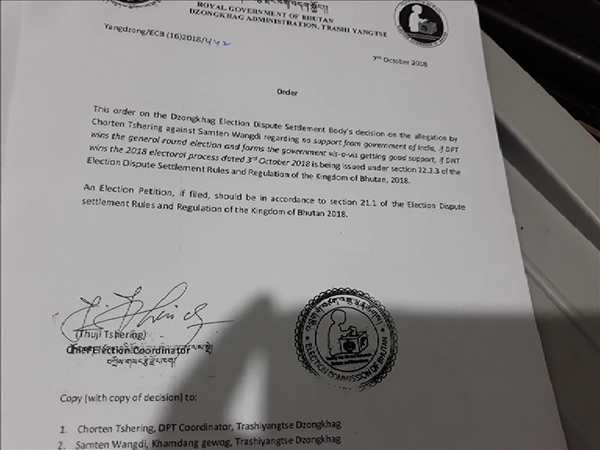 The party member in a social media, WeChat group consisting of 51 members had said, if Druk Phuensum Tshogpa was elected, India would not render support to Bhutan for any developmental activity. But, if DNT forms the government, India would continue the support.

However, the party member said, he was just explaining a news piece which was broadcasted in Hindi by one of the Indian media houses to the group members.

DPT had filed a complaint with the DEDSB on October 3 with the voice record as evidence.

The member was found to have contravened section 294 and section 4.4 of the Election Act and the ECB Social Media Rules and Regulations.

The DEDSB will also issue a written warning to the individual who sent the voice recording to DPT’s coordinator as it violates section 4.1 of the ECB’s Social Media Rules and Regulations.

Any party not satisfied with the decision can appeal to the Central Election Dispute Settlement Body within five days from the issuance of the order.