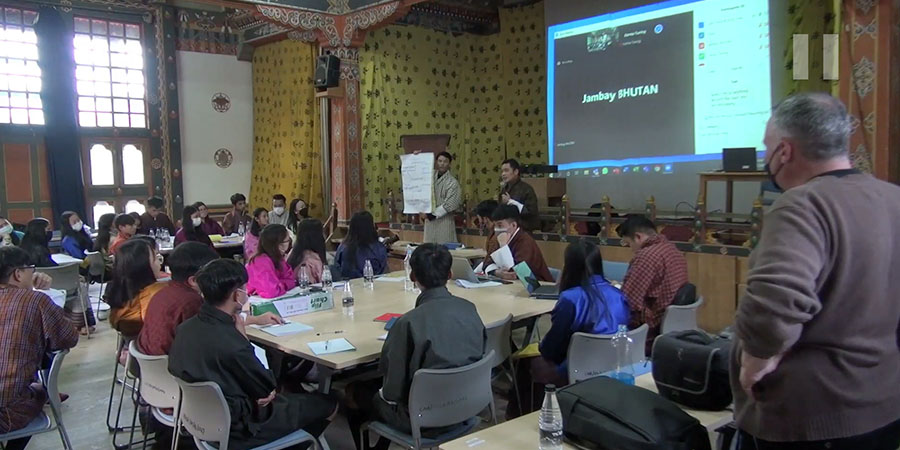 Bhutan is known globally for its pristine environment and carbon negative status. The generations to come have equal rights over this environmental wealth as does the current generation. To ensure that the rich environment is preserved for all times to come, a group of youth from College of Natural Resources and Jigme Singye Wangchuck School of Law have drafted declaration to address climate change and global warming.

Forty students from the College of Natural Resources and Jigme Singye Wangchuck School of Law drafted declaration on four key issues. It includes climate change, water induced disasters, biodiversity and pollution and youth and intergenerational equity. Through the declarations, they are calling on bureaucrats and politicians to act now on the impacts of climate change.

“I hope that the policy makers, politicians, and parliamentarians will take up this declaration as a call to them in bringing about the change for the youth of our country,” said Leki Tshering, a student from Jigme Singye Wangchuck School of Law.

“The impact on the environment won’t be huge if we take care of our own wastes. There is a need to have concrete rules for people living up-streams on how to manage their wastes because their wastes are affecting the people living downstream,” said Sonam Tshogyel, a student of the College of Natural Resources.

“Today, we have committed some of the declarations which we can practice at individual level like car pooling, opting for public transport system which would significantly contribute in reducing impacts of global warming. We want to call on the government to strongly contribute in international discussion about reducing and then also about the climate financing programme,” said Nidup Dorji, another student from the College of Natural Resources.

Gopilal Acharya, a Journalist/Communication Consultant said the declaration by the youth will also suggest innovative solutions to combat impacts of climate change. “Young people can call on their peers, young people around the world to take similar actions to fight climate change and urge the world leaders to do something, to take more concrete action in terms of slowing down the global warming and also in terms of making commitment to reduce the use of fossil fuel and cut down emission.”

Wangchuk Namgay, a geologist from the National Center for Hydrology and Meteorology said the country’s glacial lakes are most vulnerable to global warming and climate change. Among seventeen potentially dangerous lakes in the country, eleven are at the base of Punatsangchhu. “There are lots of triggering agents which we cannot predict such as landslides, which may slide into the lake and cause outburst. We also have avalanches from the glaciers itself. We have seismic as well.  If there is a high seismic activity at the lake site then we can also have Glacier Lake Outburst Flood.”

The declaration will be signed on December 11 coinciding with the International Mountain Day to pay tribute to the country’s glaciers.

Their declaration will be used in national and international conferences in the future to call on policy makers to bring changes in climate change mitigation plans and policy.