Current loaders of MDP asked to leave by this Friday, Phuentshogling 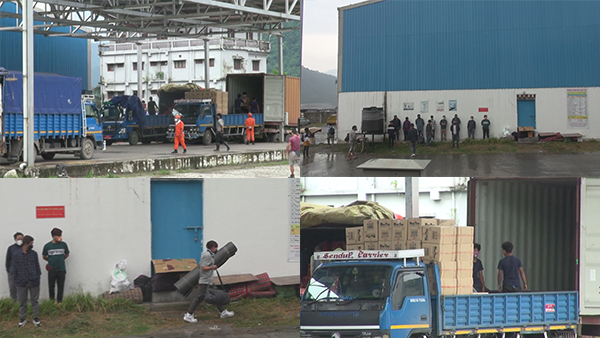 A private enterprise fully takes over the charge of loading, unloading and transhipment of goods at the Mini Dry Port (MDP) in Phuentshogling. But the loaders, who have been working there until now are disheartened.  The private enterprise has hired another group of loaders, which means the current loaders will have to leave. There are 110 existing loaders at the MDP.

The MDP was outsourced to a private enterprise last month. The works were mechanized using machines such as conveyer belt, forklifts and crane forcing many loaders to leave the job. But they were again called back after the mechanisation failed.

However, now the private enterprise is again taking charge as they have hired nearly a hundred new loaders. As per the loaders who have been working at the dry port, the private owner asked them to leave by Friday.

“Initially, when the risk was very high and people even scared to come out of their home, I along with my friends worked here. His Majesty also appreciated our work. The taskforce was happy as well. Suddenly, when we are told to leave by 22nd January, my friends here are asking me to help them out,” said Sonam Wangchuk, a loader.

“We do not have a place to stay in Phuentshogling. There are many who came all the way from Monggar, Trashi Yangtse and Lhuentse. We feel that if we can’t get an opportunity to work even as a loader here, we are sceptic about getting any better opportunity elsewhere,” said Galey Norbu, another loader.

Loaders said they have families depending on their earnings.

“I have three children studying in schools. It is difficult to meet the expenditure if a situation like this happens. Often it compels me to think that, maybe I should withdraw one of my children from school,” said Sonam Tshering.

The new loaders will be given Nu 1,000 per day. Even the food and accommodation will be provided free of cost. According to the private enterprise, they have initially given the opportunity to the existing ones to work with them but they denied. The current loaders earn Nu 2,000 per day on an average.

As per the enterprise, they charge half the amount, which the previous loaders are charging.

According to importers, the reduction in the transhipment charges at the MDP will help reduce the price of commodities in the market.