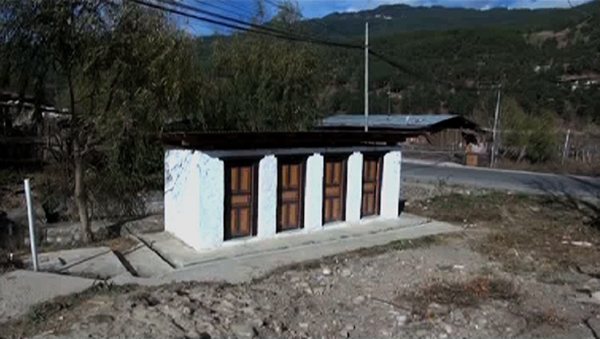 People are not happy with the lack of an adequate public toilet facility in Chamkhar town. There are two toilets in the town currently, but one of them is badly maintained and the other is locked and allocated to some offices and the taxi drivers’ association in the town.

The 4-unit public toilet behind Chamkhar town was constructed in 2018. Ever since the toilet has remained locked most of the time. The municipality handed over the toilet keys to traffic police, a hotel owner and the taxi drivers’ association after they lost one of the cisterns from a toilet. For the public, this is frustrating as they have to often return seeing the toilets locked.

The other public toilet just below the vegetable market is old and in need of maintenance. There is no one assigned to maintain it.

“The toilet at the vegetable market is poorly maintained and barely usable. As Chamkhar town is the transit point between eastern and western Bhutan, there is a lot of passenger buses and travellers stopping here for a night or two. So there is a serious need of adequate public toilet facilities here,” said Ugen Sangay, the Thromde Ngotshab.

“We don’t come to Chamkhar town often. But when we come here it is inconvenient to answer nature’s call. There is no proper public toilet facility. The one at the vegetable market is in need of repair. Some of the doors are broken and it lacks proper water facility. We have to go to hotels to use the toilet and for that, we have to buy something from them,” said Tshewang Peldon from Chhoekhor.

The dzongkhag administration claimed that the office has been looking after the hygiene of the town’s public toilets. The Bumthang Dzongda Pasang Dorji said,”We have been taking care of the toilets near the vegetable market and they are in good condition. The newly built 4-unit toilets are for the public but I don’t know how they have remained locked. I will look into it and ensure that they remain open for public use.”

The issue is not just confined to toilets. People are also not happy with bad sewerage system in the town area. Some people can be seen clearing the sewer by themselves when the sewage overflows and affects them.

“The municipality constructed a septic tank several months ago. We don’t know how the work was executed but the tank is not working as of now. The sewer line hasn’t been connected to the tank. In my capacity as a Thromde Thuemi, I have been informing the municipality but to no avail. Right now, the unpleasant smell from the sewer is annoying the customers as well as the shopkeepers and other residents nearby,” said Sangay Phuntsho, a resident.

Another resident, Chethay said, “All the sewage goes to the septic tank from the chamber near my home. The sewer gets blocked quite often and it overflows. We have our altar room just across the drain and now it has been filled with a foul smell. We can’t even eat or sleep properly. This has been going on for about 3 years now.”

Bumthang Dzongda clarified that the lack of a sewer vacuum truck in the municipality is affecting the proper functioning of the sewerage system.

“In the first place, there are no proper sewers in Bumthang. Secondly, the sewer vacuum truck we have broken down. However, we got a budget to purchase a new one. Once we do so, we will empty the septic tanks frequently. So far, we have been seeking help from the Trongsa dzongkhag administration for their vacuum truck. We will still need to rely on them until our new truck arrives,” said Dzongda Pasang Dorji.

Meanwhile the dzongda also highlighted on other plans the Dzongkhag administration has in place to address public toilets issues and other related concerns. One of them is building a new bus terminal with public toilet facilities near the artificial turf football ground.

The construction works for the new bus terminal will begin within a month or two’s time. According to the dzongkhag administration, the facility will be built at a cost of Nu 30 M. The Government of India will finance the project through its Small Development Project.